These are the standings and playoffs of the Maritime Senior Hockey League for the 1932-33 season.

The qualifications for the playoffs were that the two half champions would play off each other in the final. If the same team won both halves, then the two second place teams would play a semi final, with the winner going against the first place team.

Had Charlottetown won all three of its final games, the standings would have ended up as follows:

Charlottetown threatened to throw all three of its games. Halifax and Moncton stood their ground but finally relented and let the Abegweits default their games rather than cheat the fans with suspicious games. The standings then ended up as above.

Moncton Hawks received a bye to the final of the 1932-33 Maritimes Senior Playoffs. 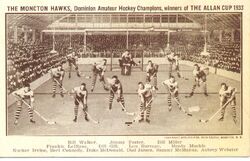 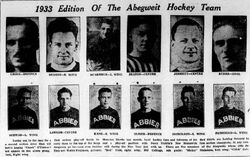 Charlottetown Abegweits
Add a photo to this gallery 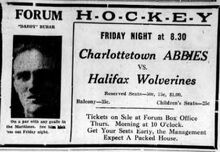 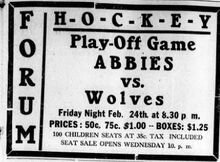 Semi Final @ Charlottetown
Add a photo to this gallery

Retrieved from "https://icehockey.fandom.com/wiki/1932-33_MSHL_Season?oldid=600698"
Community content is available under CC-BY-SA unless otherwise noted.