The league's two best teams met in the second round of the playoffs, both teams having received byes in the first round. The series was one of the closest in NHL history with four of the five games being decided in overtime.

Game 1 after Dit Clapper tied the game at 1-1 in the second period, overtime was needed to decide the game. The Bruins leading scorer Marty Barry potted the winner at 14:14 of the first OT period.

Game 2 was a close checking affair with the only goal scored by Busher Jackson at 15:03 of the first OT period to tie the series at 1-1. Lorne Chabot registered the shutout.

Game 3 saw the Bruins lead on a goal by Nels Stewart at 4:47 of the second period until Ken Doraty tied it up with less than six minutes left in the game. To no avail as Eddie Shore scored at 4:23 of the first OT period.

Game 4 was the only wide-open affair of the series. A pair of goals by Busher Jackson and Charlie Sands (who would later play for the Bruins and become one of their top ten scorers of the 1930's) led the Leafs to a 5-3 victory and tied the series 2-2.

Game 5 was the second longest game in NHL history requiring six overtime periods before Ken Doraty scored at 4:46 on Tiny Thompson to win the series for the Leafs. Eddie Shore didn't leave the ice for the 60 minutes of regulation time, except for two penalties he took, and played nearly all of overtime. After four OT periods, the two GMs, Art Ross and Conn Smythe agreed the game be decided by a coin toss. But the players wouldn't have it and NHL president Frank Calder, who was in attendance, agreed with the players, so the game continued. Lorne Chabot picked up his second shutout of the playoffs. The Leafs would lose to the Rangers in the finals. 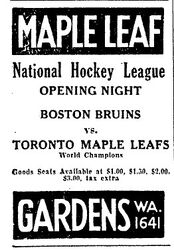 Season Tickets
Add a photo to this gallery

Action from Game 2 the 1933 Semi-finals in which the Rangers defeated the Red Wings 2-0.

Arguably the most interesting NHL video of the 1930's. 1933 Finals Game 4 highlights of all periods of play including the Cup winning goal by Bill Cook in overtime. Foster Hewitt provides the play-by-play and interviews Conn Smythe, Dick Irvin, Busher Jackson, Charlie Conacher, King Clancy and Red Horner in the dressing room during the first intermission. Horner played with a broken right hand and shows Hewitt his cast and how he was able to grip his stick. Hewitt then interviews the Rangers in their dressing room in the second intermission.

Retrieved from "https://icehockey.fandom.com/wiki/1932%E2%80%9333_Toronto_Maple_Leafs_season?oldid=670285"
Community content is available under CC-BY-SA unless otherwise noted.