The 1932–33 Montreal Maroons season was the 9th season of the Maroons franchise in the National Hockey League (NHL). The Maroons finished 2nd in the Canadian Division and lost in the Quarter-finals to the Detroit Red Wings 5 goals to 2.

With the Great Depression in full swing, the Maroons previously packed arena and prosperous gate receipts vanished. Financially strapped, the high-scoring "S Line" was broken up with Babe Siebert and Nels Stewart sold for cash to keep the team afloat.

During the 5-2 loss to the New York Americans on November 22, 1932, goalie Flat Walsh was injured three minutes into the game. Winger Hugh Plaxton took over in net and took the defeat. Dave Kerr was recalled and became the starting goalie for the next three games, which he all lost. Walsh returned for the 5-3 win over the Detroit Red Wings on November 29, 1932 in which Andy Bellemer played his first NHL game. Walsh then led the Maroons on a seven game undefeated streak. 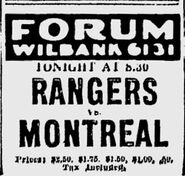 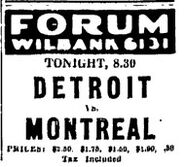 Retrieved from "https://icehockey.fandom.com/wiki/1932–33_Montreal_Maroons_season?oldid=727676"
Community content is available under CC-BY-SA unless otherwise noted.