The 1932–33 Montreal Canadiens season was the team's 24th season. The Canadiens finished 3rd in the Canadian Division and lost in the Quarter-finals to the New York Rangers 4 goals to 3.

The summer led to changes in the Canadiens organization. First, a change occurred in the team ownership. Louis Letourneau, regarded as a positive influence on the team, "generous in his praise and encouragement" sold his interest in the Canadiens to his partners Leo Dandurand and Joe Cattarinich.[1]

After the disappointing 1931–32 season, Cecil Hart faced pressure from fans to resign his position in favour of a French-Canadian. When Hart, an independent insurance broker, had signed on as coach, the season was four and a half months and 36 games. Now it was 48 games and seven months. A combination of the pressure, and the negative effects on his business, led him to resign in August 1932. Former Canadiens star Newsy Lalonde would take over as coach.[2]

Due to the Great Depression, economic conditions in Montreal were poor which caused attendance to decline. Over 40,000 families and 150,000 individuals were receiving social assistance. The team would lose $20,000 during the season.[3]

On the ice, the Canadiens under new coach Lalonde spent much of the season in last place, but managed to make the playoffs when they rallied to finish third. Howie Morenz, who had previously led the league in scoring, declined in production, and Aurel Joliat took over as the team leader in scoring.

In the first round the Canadiens met the New York Rangers, who had placed third in the American Division. The Canadiens lost the two-games total-goals series 8-5. 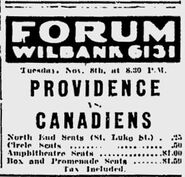