The 1931 Men's Ice Hockey World Championships were held between February 1 and February 8, 1931 in Krynica-Zdrój, Poland.

The six participating teams played a round-robin, with the top three teams winning gold, silver and bronze respectively. Canada's University of Manitoba Grads won the tournament with a total of nine points after winning four games and tieing one.[1] Sweden's 0 – 0 tie with Canada was the first time a European team did not lose to a team representing Canada in a World Championship match. Due to a tie between Czechoslovakia and Poland in points, fourth spot was given to Poland who had more total goals scored.[1]

The four participating teams played a round-robin, with games played between February 4 to February 7. The winner Hungary won all three games, finishing with six points and earning sixth place in the overall standings.[1]

The 1931 World Championship also acted simultaneously as the 15th European Championships. Austria were named champions after finishing as the highest ranked European team in the tournament in third. Second and third were awarded to Poland and Czechoslovakia respectively.[1]

The final standings of the tournament: 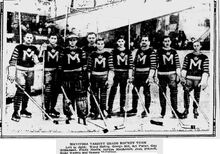