This is the 1931-32 season of the Saskatchewan Junior Hockey League:

There were nine junior teams registered with the Saskatchewan Amateur Hockey Association (SAHA). In the north there were three teams in Saskatoon that formed a league with one more independent team in Prince Albert. In the south there was a three team league in Regina plus independent teams in Estevan and Moose Jaw. The SAHA arranged playoffs leading to northern and southern champions and then the provincial title.

The Monarchs qualified for the final because of a better goal average than the Canadians.

The Wesleys played as the Saskatoon Crescents in the Northern League. 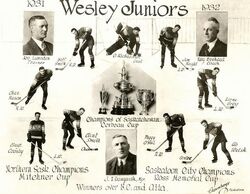 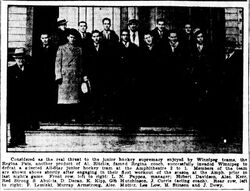 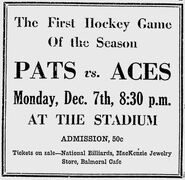 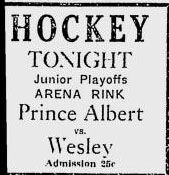 Retrieved from "https://icehockey.fandom.com/wiki/1931-32_SJHL_Season?oldid=467086"
Community content is available under CC-BY-SA unless otherwise noted.