This was the 1931-32 season of the Montreal Senior Group:

The last doubleheader of the season was cancelled and instead a game was played between the Winnipeg Winnipegs, who had just won at the 1932 Olympics, and a league all-star team.

The game was played @ Montreal on Monday, February 15, 1932. The Winnipegs beat the all-stars 2-1. Attendance was about 7,000, which was the largest this season in Montreal for an amateur game. 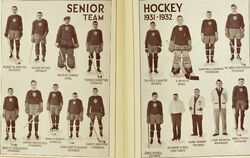 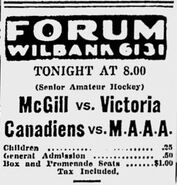 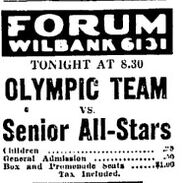 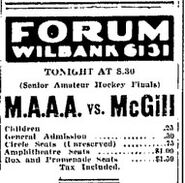 Retrieved from "https://icehockey.fandom.com/wiki/1931-32_MSG?oldid=608805"
Community content is available under CC-BY-SA unless otherwise noted.