The 1931–32 Montreal Canadiens season was the team's 23rd season. After winning two consecutive Stanley Cup championships, the Canadiens were favoured to repeat, winning the Canadian division, but lost in the Semi-finals to the New York Rangers 3 games to 1.

The Canadiens wore an arm patch during the 1931-32 season to celebrate winning the Stanley Cup two years in a row. The jersey was worn for special occasions only.

Howie Morenz won the Hart Trophy for his outstanding play during the regular season.

The Canadiens, by placing first, received a bye to the semi-finals where they met the New York Rangers, who had won the American Division. The Canadiens, missing some regulars due to injury, lost the best-of-five series three games to one. 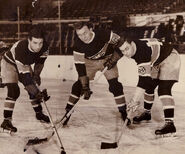 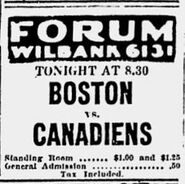 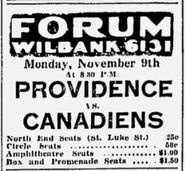 Action from Game 4 of the Rangers-Canadiens Semi-final series on March 27, 1932 featuring the game's only goal by Ott Heller.