The 1930 Men's World Championships were held between January 30 and February 10, 1930 in Chamonix, France, Vienna, Austria and Berlin, Germany.

This was the first World Championship which was not held as a part of the Olympic Games.

The Toronto Canadas represented Canada and were world champions.

The tournament was a direct knock-out playoff.

Warm winter weather melted the ice in Chamonix, France and forced Ligue Internationale de Hockey sur Glace officials to move the tournament to Berlin, Germany, and the Sportpalast (which had artificial ice.) Additionally, the 4th place match was played in Vienna, Austria, making this the only world hockey championship tournament to take place in three different countries.

The Canadian team was recognized as being so dominant, such that they did not participate in the play off tournament. Canada was put into the gold medal final game, and the tournament was played to determine an opponent.

Canada played an exhibition tour both before and after the championship. See 1929-30 Toronto Canadas. 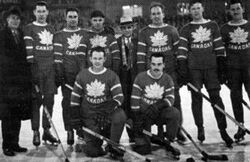 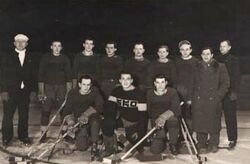 Czechoslovakia
Add a photo to this gallery

Video of a Canada-Great Britain pre-tournament friendly in Chamonix

Retrieved from "https://icehockey.fandom.com/wiki/1930_World_Championship?oldid=697124"
Community content is available under CC-BY-SA unless otherwise noted.