This is the 1930-31 Intermediate Intercollegiate Series. The Western Section returned all four teams and the Central Section was back. The University of Montreal departed the Eastern Division for a separate francophone competition against Laval University and the University of Ottawa.

(Played as OHA Senior B Group 2)

Won by Queen's University who played in OHA Senior B Group 1. 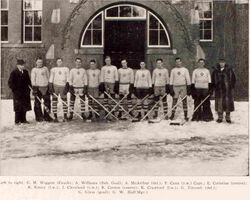 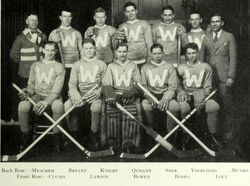 Retrieved from "https://icehockey.fandom.com/wiki/1930-31_Intermediate_Intercollegiate?oldid=471596"
Community content is available under CC-BY-SA unless otherwise noted.