This is the 1930-31 season of the CIAU Central. There were only 2 teams registered. They played a two game total goals final.

McGill University and University of Toronto both also played in their provincial senior leagues.

McGill won the Quebec title while Toronto finished in 5th place in Ontario.

January 24 @ Toronto
Add a photo to this gallery 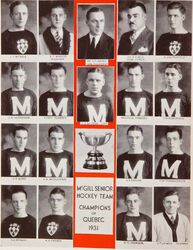 Retrieved from "https://icehockey.fandom.com/wiki/1930-31_CIAU_Season?oldid=384833"
Community content is available under CC-BY-SA unless otherwise noted.