The 1930–31 Montreal Maroons season was the 7th season of the Maroons franchise in the National Hockey League (NHL). The Maroons finished 3rd in the Canadian Division and lost in the Quarter-finals to the New York Rangers 8 goals to 1.

GM James Strachan took the Maroons through the most significant overhaul in the franchise's history, replacing half the team.

Red Dutton, a reliable defenseman with four seasons service with the Maroons, was sold to the New York Americans along with three other players. Dutton was replaced with Lionel Conacher.

With the retirement of goalie Clint Benedict, the Maroons signed Dave Kerr while Flat Walsh became the starter. Kerr was one of multiple players signed from the Montreal AAA team that won the 1930 Allan Cup. These included Des Roche and his brother Earl Roche, John Gallagher, Paul Haynes, Al Huggins and Glenn Brydson.

Defenseman Jack McVicar was signed and played the first of two NHL seasons.

Opening night on November 11, 1930 saw five of the seven signed from the Montreal AAA team in the line-up in addition to Jack McVicar. Goalie Dave Kerr and Glenn Brydson didn't play as the Maroons lost 2-0 to the Ottawa Senators. The losing and scoreless streak continued for the next two games but the final straw was a 7-1 humiliation at the hands of the cross-town Montreal Canadiens on November 20, 1930. Down 6-1 after two periods, goalie Dave Kerr made his NHL debut and allowed one goal.

The veterans took over in the next game on November 22, 1930 as the "S Line" scored twice in a 4-3 win over the New York Americans. During the December 18, 1930 game versus the Toronto Maple Leafs, Flat Walsh was injured and Dave Kerr took over in net. The Maroons won 2-1 and Kerr played the rest of the season.

The introduction of so many rookies into the line-up had a predictable effect. Many struggled and they scored a combined 8 goals, led by John Gallagher's 4 markers. However, with the exception of Al Huggins, all would go on to successful NHL careers. Glenn Brydson would play 295 games while goalie Dave Kerr would be named once to the NHL First All-Star Team, once to the Second Team and win the Vezina Trophy while playing for the 1939–40 New York Rangers who he'd lead to victory in the 1940 Stanley Cup Finals.

The Maroons veterans continued to dominate play as the team went on a 9-2-3 run that had them in first place in the Canadian Division on January 3, 1931. After the 5-1 loss to the New York Rangers on January 6, 1931, Paul Haynes, Des Roche and Al Huggins were demoted to the minors and Baldy Northcott was called up. Northcott became a regular and played the next seven seasons for the Maroons, capped with a First Team All-Star selection in 1933. In the midst of a losing skid in February, coach Dunc Munro returned to the line-up and played four games while George Boucher took over the coaching duties for the rest of the season.

By late February, the Maroons were battling the Americans for the last playoff berth. A 3-2 win over the Philadelphia Quakers on March 14, 1931 sealed a post season spot. Although the Maroons were tied in points with the Americans, they won by virtue of more wins. However, top scorer Hooley Smith was injured during the March 7, 1931 game against Toronto and lost for the rest of the season and playoffs.

Hampered by the loss of star forward Hooley Smith at the end of the regular season, the Maroons were thoroughly outplayed by the New York Rangers. Rangers Bill Cook and Paul Thompson each scored three goals in the two game, total goals series. 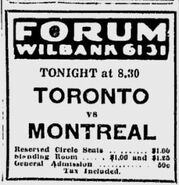 Retrieved from "https://icehockey.fandom.com/wiki/1930–31_Montreal_Maroons_season?oldid=727698"
Community content is available under CC-BY-SA unless otherwise noted.