The 1930–31 Montreal Canadiens season was the team's 22nd season. The Canadiens finished 1st in the Canadian Division and defeated the Chicago Black Hawks in the 1931 Stanley Cup Finals 3 games to 2.

The league's two best teams met in the second round of the playoffs, both teams having received byes in the first round. The series was extremely close with three of the five games being decided in overtime.

Game 1 in Boston saw the Bruins behind 4-1 entering the third period. A three goal comeback sent the game into overtime where Cooney Weiland scored his second goal of the game to win it for the Bruins.

Game 2 in Boston was a close checking affair with the only goal scored by Georges Mantha in the first period. Early in the third period, Habs goalie George Hainsworth was cut on the forehead with a skate, stopping the game for 8 minutes while he was tended to in the locker room. With 4 minutes left in the game, George Owen was given a major penalty for an infraction against Howie Morenz. This resulted in a shower of debris being thrown on the ice, stopping the game for 15 minutes while it was cleaned up. With a minute to go, for the first time in NHL history, coach Art Ross pulled goalie Tiny Thompson in a failed attempt to tie the game.

Game 3 saw the series shift to Montreal for the remainder of the games played. Down 3-1 entering the third period, the Bruins again mounted a third period comeback to tie it up on goals by Cooney Weiland and Marty Barry. However, Georges Mantha scored the winner in overtime.

Game 4 saw the Bruins build a three goal lead entering the third period including Weiland's fourth goal of the series. A goal by the Canadiens' Nick Wasnie wasn't enough as the Bruins tied the series.

Game 5 followed the pattern of game 1 and 3 in which the Bruins fell behind entering the third period. Two goals from series scoring leader Weiland tied the game up but Wildor Larochelle scored at 19:00 of the first OT and the Habs took the series 3-2. Cooney Weiland led all playoff scorers with 9 points.

For more details on this topic, see 1931 Stanley Cup Finals.

† Left off the cup, but qualified to be on it. A Played 3 games in Finals. B Played 22 of 44 regular season games 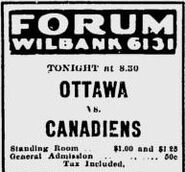 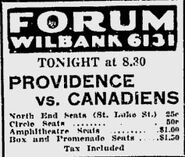