Ice Hockey Wiki
Register
Don't have an account?
Sign In
Advertisement
in: Boston Bruins seasons, 1930 in hockey, 1931 in hockey

The 1930–31 Boston Bruins season was the Bruins' 7th season in the NHL. The Bruins finished 1st in the NHL and won their fourth Prince of Wales Trophy. They lost in the Semi-finals to the Montreal Canadiens 3 games to 2.

The Bruins continued where they left off from their record-breaking 1929-30 season and again led the league in scoring and finished first. The "Dynamite Line" of Dit Clapper, Cooney Weiland and Dutch Gainor continued to power the offense, although Gainor's play declined and he was traded in the off season. Marty Barry continued to blossom and would become the Bruins preeminent scorer of the early 1930's.

Eddie Shore continued his outstanding play, was runner-up for the Hart Memorial Trophy and a First Team All-Star.

Highlights of the season included December in which the Bruins only lost once and a Christmas home game against the Philadelphia Quakers who they drubbed 8-0 powered by a Dit Clapper hat trick. The Quakers came into the game with a 1-13-1 record and were not in a holiday mood. Down 7-0 in the third period, two separate brawls sent policemen onto the ice in a bid to restore order. Six players were ejected - Clapper, Eddie Shore, George Owen for the Bruins and Gerry Lowrey, Hib Milks and Allan Shields for the Quakers. They were also fined $15 each.

The league's two best teams met in the second round of the playoffs, both teams having received byes in the first round. The series was extremely close with three of the five games being decided in overtime.

Game 1 in Boston saw the Bruins behind 4-1 entering the third period. A three goal comeback sent the game into overtime where Cooney Weiland scored his second goal of the game to win it for the Bruins.

Game 2 in Boston was a close checking affair with the only goal scored by Georges Mantha in the first period. Early in the third period, Habs goalie George Hainsworth was cut on the forehead with a skate, stopping the game for 8 minutes while he was tended to in the locker room. With 4 minutes left in the game, George Owen was given a major penalty for an infraction against Howie Morenz. This resulted in a shower of debris being thrown on the ice, stopping the game for 15 minutes while it was cleaned up. With a minute to go, for the first time in NHL history, coach Art Ross pulled goalie Tiny Thompson in a failed attempt to tie the game.

Game 3 saw the series shift to Montreal for the remainder of the games played. Down 3-1 entering the third period, the Bruins again mounted a third period comeback to tie it up on goals by Cooney Weiland and Marty Barry. However, Georges Mantha scored the winner in overtime.

Game 4 saw the Bruins build a three goal lead entering the third period including Weiland's fourth goal of the series. A goal by the Canadiens' Nick Wasnie wasn't enough as the Bruins tied the series.

Game 5 followed the pattern of game 1 and 3 in which the Bruins fell behind entering the third period. Two goals from series scoring leader Weiland tied the game up but Wildor Larochelle scored at 19:00 of the first OT and the Habs took the series 3-2. Cooney Weiland led all playoff scorers with 9 points. 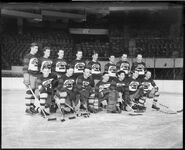