There were no changes to the teams. However, the Victoria Cubs' arena burned down on November 11, 1929, before the start of the season. They were then forced to play all their games on the road. Next season the Cubs moved to Tacoma, Washington.

The Lions played a three game series against the Boston Bruins of the National Hockey League in Vancouver. 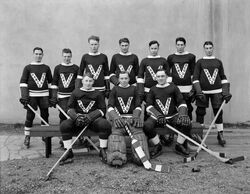 Vancouver Lions
Add a photo to this gallery

Vancouver
Add a photo to this gallery

Retrieved from "https://icehockey.fandom.com/wiki/1929-30_PCHL_Season?oldid=459941"
Community content is available under CC-BY-SA unless otherwise noted.