The 1929–30 Ottawa Senators season was the club's 13th season in the NHL, 45th overall. The Senators finished 3rd in the Canadian Division and lost in the Quarter-finals to the New York Rangers 6 goals to 3. It would be the original Senators last playoff appearance.

The Senators made a modification to their jerseys, adding an "O" logo to the chest of their jerseys. The club had last wore an "O" back in 1901 when they shared jerseys with the Ottawa Football Club.

The Senators would continue to have some financial difficulties, and due to poor attendance against US-based teams, the Senators moved 2 home games to Atlantic City against the New York Americans and New York Rangers, along with two to Detroit, and a game to Boston.

Hec Kilrea would lead the club with 36 goals and 58 points, while King Clancy would add 40 points (17 goals and 23 assists) from the blue line. Joe Lamb would provide toughness, leading the NHL with 119 penalty minutes, and would have a very good offensive season, finishing with 29 goals and 49 points.

Alec Connell would once again be steady in the Senators net, winning 21 games, earning three shutouts and be among the league leaders in GAA at 2.55.

The Senators finished in third place in the Canadian Division, and faced the third place team from the American Division, the New York Rangers in a two-game most-goals series. The Rangers defeated the Senators by a combined score of 6–3 to end the Ottawa's season. 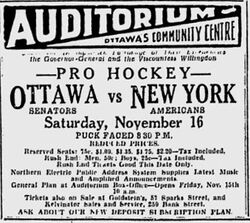 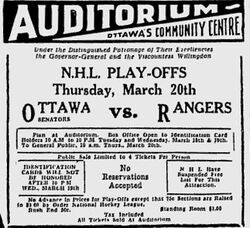 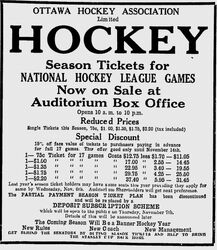 Season Tickets
Add a photo to this gallery

Retrieved from "https://icehockey.fandom.com/wiki/1929–30_Ottawa_Senators_season?oldid=725450"
Community content is available under CC-BY-SA unless otherwise noted.