The 1929–30 Montreal Maroons season was the 6th season of the Maroons franchise in the National Hockey League (NHL). The Maroons finished 1st in the Canadian Division and lost in the Semi-finals to the Boston Bruins 3 games to 1.

Having recovered from a heart attack suffered the previous season, Dunc Munro became the Maroons player-coach. His stabilizing presence on defense benefited the team greatly.

The Maroons uniforms underwent a change with multiple, thin "barber-pole" stripes added to the jersey arms and body as well as the socks. These uniforms would be used for the next two seasons.

New rules, which allowed forward passing in the offensive zone and then introduction of the blueline off-side rule, greatly benefited the Maroons offense. Two members of the "S Line" had a career-high seasons with Nels Stewart scoring 39 goals and 21 for Hooley Smith. Babe Siebert chipped in 14 goals while sophomore Dave Trottier had a breakout season with 17 goals.

The November 23, 1929 game against the Boston Bruins was particularly violent. Superstar defenseman Eddie Shore battled the Maroons all night, particularly Babe Siebert who suffered a broken toe, bruised rib and black eye. Dave Trottier spat blood after a Shore butt-end. Shore played 58 minutes of the game, despite high sticks from Seibert that resulted in a deep cut over his eye, three teeth knocked out and a concussion. The Bruins won 4-3 with Shore marking two assists. Shore went to hospital after the game and missed the return match against the Maroons on the 26th. Bruins' president Charles Adams presented Shore with a check for $500, purportedly $100 for each facial scar he received at the hands of the Maroons.

This was the last NHL season for goalie Clint Benedict. During the January 7, 1930 game against the Montreal Canadiens, a Howie Morenz shot broke Benedict's nose and cheekbone, knocking him unconscious. Forced from the line-up, Flat Walsh took over as the starting goalie.

Goalie Abbie Cox played his first NHL game during the Maroons 7-2 win over the New York Americans on February 1, 1930.

Benedict returned to the line-up on February 20, 1930, wearing a leather face mask. He held the Americans to a 3-3 tie, becoming the first goalie in NHL history to wear facial protection in a game. Benedict played five more games with the mask but again suffered a nose injury, during the 6-2 loss to the Ottawa Senators on March 4, 1930. Flat Walsh came on in relief and it was Benedict's last NHL game.

The increased scoring combined with a superlative season by goalie Flat Walsh, who finished second in the league in goals against average, propelled the Maroons to their first division championship and a bye into the Stanley Cup Semi-finals.

The first game of the series was a grueling overtime match in which Bruins' coach Art Ross was noted for ceaseless criticism of the officiating and the ice condition, to the annoyance of the home crowd in Montreal, won on a Harry Oliver overtime goal at the 45 minute mark. The Bruins won the second match handily on two goals from Dit Clapper, partially due to an injury forcing Montreal star Babe Siebert out only a few minutes into the game, but with Siebert's return in the third game the match was much closer. Unusually, Montreal starter Buck Boucher broke a leg 24 minutes into overtime, and his replacement, little-used defenseman Archie Wilcox, scored the game winner at the 26 minute mark. Siebert did not dress for the final game, and the Bruins overwhelmed the Maroons to reach the Cup finals, behind two goals from Marty Barry, earning the Bruins a rest while they waited for their next opponent. 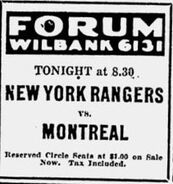 Hawks Johnny Gottselig rounds the net past Maroons Flat Walsh on December 12, 1929.
Add a photo to this gallery

Retrieved from "https://icehockey.fandom.com/wiki/1929–30_Montreal_Maroons_season?oldid=745516"
Community content is available under CC-BY-SA unless otherwise noted.