Ice Hockey Wiki
Register
Don't have an account?
Sign In
Advertisement
in: Montreal Canadiens seasons, 1929 in hockey, 1930 in hockey,
and 2 more 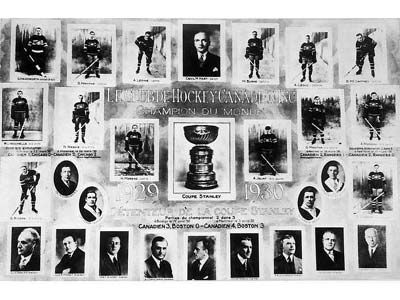 The 1929–30 Montreal Canadiens season was the team's 21st season. The Canadiens finished 2nd in the Canadian Division and defeated the Boston Bruins in the 1930 Stanley Cup Finals 2 games to 0.

To combat low scoring, a major rule change was implemented. Players were now allowed forward passing in the offensive zone, instead of only in the defensive and neutral zones. This led to abuse as players sat in front of the opposing net waiting for a pass. The rule was changed again in December 1929, and players were no longer allowed to enter the offensive zone before the puck. This was the birth of the modern-day offside rule. The Canadiens doubled their scoring output compared to the previous season.

On December 14, 1929, Alfred Lepine scored in the first period then added four goals and an assist in the second period of a game versus Ottawa, won 6–4 by Montreal. As of 2020, this feat is still the Canadiens' record for goals and points in one period.[1]

The Final was a best of three series. The Canadiens had lost all four of their regular-season meetings with the Bruins. The Bruins were heavily favored to retain the Stanley Cup, but were shocked in the first game of the best-of-three Finals by the play of Canadiens' goaltender George Hainsworth, who shut out the Bruins' powerful offense. In the second game, Montreal went out to a three-goal lead until Eddie Shore scored. Howie Morenz responded five minutes later and the Habs led 4-1 going into the third period. Goals by Percy Galbraith and Dit Clapper made it close but Montreal held on for the win. It was the first time all season long the Bruins had lost two games in a row[2], and the stunning defeat of the regular season champions in such a short series spurred the league to change the Cup Finals to a best-of-five series for subsequent years.[3] Clapper led all playoff scorers with 4 goals while Marty Barry and Cooney Weiland tied for the points lead with 6 each.

For more details on this topic, see 1930 Stanley Cup Finals.

† Worters was loaned from the New York Americans for one game on February 27, 1930 vs. Toronto. 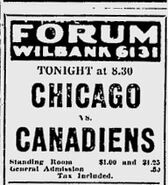