The 1928–29 Montreal Canadiens season was the team's 20th season, and 12th in the National Hockey League (NHL). The Canadiens finished 1st in the Canadian Division and lost in the Semi-finals to the Boston Bruins 3 games to 0.

The Boston Bruins moved into a new home, the Boston Garden. In their debut game at the Garden on November 20, 1928, the Bruins lost 1–0 to the Canadiens.

The New York Americans, last place finishers in 1927–28, surprised everyone by occupying first place for much of the season in the Canadian Division. However, the Montreal Canadiens dislodged the Americans and finished first. George Hainsworth, Canadiens goaltender, set an unprecedented record of 22 shutouts and a 0.98 goals against average.

The Boston Bruins faced the Montreal Canadiens for the first time in the playoffs. As the winners of the Canadian Division, Montreal had also received a bye to the semi-finals in a best-of-five series.

Game 1 began at the Boston Garden where brilliant goaltending by Tiny Thompson led Boston to a 1-0 win on an early first period goal by Cooney Weiland.

Game 2 was a repeat of Game 1, an early goal by Weiland and Thompson shutting out the Habs for a 1-0 victory. However, this game was a much rougher affair with 30 minutes in penalties called.

Game 3 saw the series shift to the Montreal Forum and out do Game 2's roughness with 48 minutes in penalties called. The Habs shot out to a 2-0 first period lead on goals by Albert Leduc and Aurel Joliat 8 seconds apart. But the Bruins roared back in the second period with 3 straight goals by Bill Carson, Dutch Gainor and Eddie Shore to win 3-2 and sweep the series 3-0.

The Canadiens went to Vancouver for a series against the New York Americans and the Vancouver Lions of the Pacific Coast Hockey League.

Clint Benedict of the Montreal Maroons replaced George Hainsworth in nets. Hainsworth could not take off the time from his business. 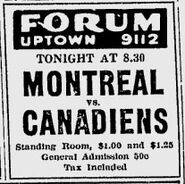 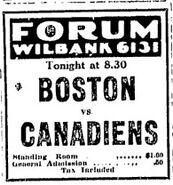