The 1927 Stanley Cup Final NHL championship series was contested by the Ottawa Senators and the Boston Bruins. It was the first solely contested by National Hockey League teams since the demise of the Western Hockey League. As of 2020, the Cup has not been contested by teams outside the league. It was won by the Ottawa Senators, coached by Dave Gill, over the Boston Bruins, coached by Art Ross. This was the Senators' fourth win since 1920, and eleventh overall, but it marked the end of the dynasty. The original Senators did not win another.

The Stanley Cup Final was technically a best of three series. However, it went four games due to two ties. At that time, if a match was tied after one twenty-minute overtime period, the game went in the books as a tie. These were the last ties in Stanley Cup history. Rough play marred the series as in the final game, Hooley Smith cross-checked Boston's Harry Oliver and late in the game Billy Coutu attacked referee Jerry Laflamme and tackled referee Billy Bell. He was subsequently expelled for life. Hooley Smith was suspended for one month of the following season for his attack on Oliver.

The April 13, 1927, game at the Ottawa Auditorium was the last Stanley Cup Final game in Ottawa until the June 2, 2007, game played at Scotiabank Place between the modern Senators and the Anaheim Ducks. It is known that one fan, Russell Williams, attended both games, both won by Ottawa.[1] 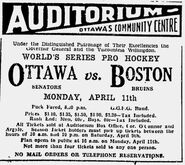