This is the 1927-28 season of the Saskatchewan Junior Hockey League:

There were five teams registered in the south and three teams in the north. The southern teams played in two leagues with the two winners playing off for a spot in the provincial final. The northern teams just participated in playoffs to determine a winner.

This was an unofficial league that operated in December and January. Its results had no bearing on the provincial playffs.

THe Tigers were the Wesleys B team. THe Universty entered a junior team. This team was the only hockey team that the University operated. There was no senior team.

Originally it was supposed to be a "double round-robin." A shortage of dates at the local arena forced the schedule to be cut in half. Most games were played as part of a doubleheader with pro or senior games. 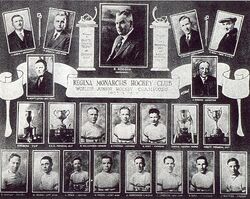 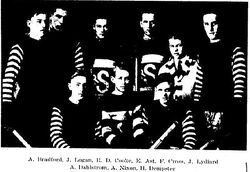 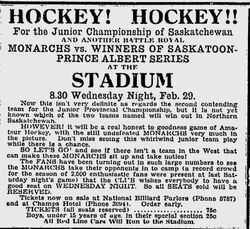 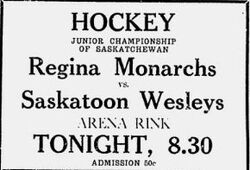 Saskatoon
Add a photo to this gallery

Retrieved from "https://icehockey.fandom.com/wiki/1927-28_SJHL_Season?oldid=461476"
Community content is available under CC-BY-SA unless otherwise noted.