This is the 1927-28 Intermediate Intercollegiate Series. There were a record 11 teams (at least in the Wikia listings) this season. Queen's University did not have a first team in the CIAU starting this season.

Note: University of Toronto II had a bye past this round and played in the 1927-28 OHA Intermediate Groups. 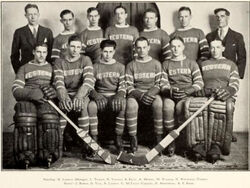 Retrieved from "https://icehockey.fandom.com/wiki/1927-28_Intermediate_Intercollegiate?oldid=471469"
Community content is available under CC-BY-SA unless otherwise noted.