Ice Hockey Wiki
Register
Don't have an account?
Sign In
Advertisement
in: Pittsburgh Pirates (NHL) seasons, 1927 in hockey, 1928 in hockey

The 1927–28 Pittsburgh Pirates (NHL) season was the team's 3rd season. The Pirates finished 3rd in the American Division and lost in the Quarter-finals to the New York Rangers 6 goals to 4. 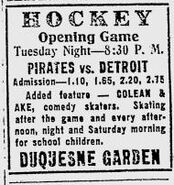