The 1927–28 Ottawa Senators season was the club's 11th season in the NHL, 43rd overall. Ottawa finished 3rd in the Canadian Division and lost in the Quarter-finals to the Montreal Maroons 3 goals to 1.

The Senators were playing in by far the smallest market in the league, and were having problems financially due to escalating expenses. Part of the problem for the Senators was they had problems drawing fans against the expansion US teams, and as a result, they would play two "home" games in Detroit, collecting the bulk of the gate receipts.

The Senators would be led offensively by Frank Finnigan, who scored 20 goals and 25 points, both team highs, while 20 year old Hec Kilrea would have a 23 point season. King Clancy would be the anchor of the Ottawa defense, and put up 15 points, along with 73 PIM. Cy Denneny would struggle all year long though, collecting only three goals, while the return of Punch Broadbent proved to be disastrous, as he only collected five points.

In goal, Alec Connell would have another strong season, earning 20 wins, having an NHL best 15 shutouts, and a 1.24 GAA. Connell would set an NHL record for longest shutout streak, as he did not allow a goal in 464 minutes and 29 seconds, recording six shutouts during the streak.

Prior to the season, the Sens would trade Hooley Smith to the Montreal Maroons in exchange for former Senators player Punch Broadbent and $22,500, and would sell defenceman Edwin Gorman to the Toronto Maple Leafs.

Program from game of Dec 24. 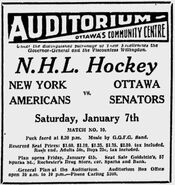 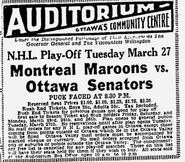 Playoff game ad.
Add a photo to this gallery

Retrieved from "https://icehockey.fandom.com/wiki/1927–28_Ottawa_Senators_season?oldid=715314"
Community content is available under CC-BY-SA unless otherwise noted.