The 1927–28 New York Rangers season was the 2nd season for the team in the National Hockey League. The Rangers finished 2nd in the American Division with a 19–16–9 record and qualified for the Stanley Cup playoffs. In a pair of two-game total goals series, New York defeated the Pittsburgh Pirates and Boston Bruins to advance to the 1928 Stanley Cup Finals, where they faced the Montreal Maroons. The Rangers defeated the Maroons 3 games to 2 to win their first Stanley Cup.

The Bruins gained a first-round bye by virtue of winning the division, and played the New York Rangers in the second round in a two-game, total goal series. Their scoring problems of the regular season continued, exacerbated by a flu bug going through the dressing room and various minor injuries. Eddie Shore, Dit Clapper, Dutch Gainor and Harry Connor were particularly affected.[1]

Boston tied the first game 1-1 in New York, the Rangers' final home game of the playoffs - this was the first of perennial disruptions to the Rangers' playoff schedule due to Madison Square Garden hosting the circus in the spring. The Bruins lost the second match in Boston 4-1, on three Ranger third-period goals as the weakened Brown-and-Gold folded at last, to drop the total-goal series five goals to two. Harry Oliver, who scored a goal in each game, was the sole offensive threat.[2] 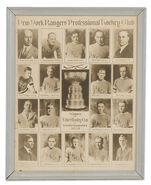 NYR Champions Composite.
Add a photo to this gallery

Retrieved from "https://icehockey.fandom.com/wiki/1927–28_New_York_Rangers_season?oldid=727397"
Community content is available under CC-BY-SA unless otherwise noted.