Ice Hockey Wiki
Register
Don't have an account?
Sign In
Advertisement
in: Montreal Maroons seasons, 1927 in hockey, 1928 in hockey

The 1927–28 Montreal Maroons season was the 4th season of the Maroons franchise in the National Hockey League (NHL). The Maroons finished 2nd in the Canadian Division and lost in the 1928 Stanley Cup Finals to the New York Rangers 3 games to 2.

On October 7, 1927, James Strachan traded Punch Broadbent back to the Ottawa Senators for Hooley Smith and $22,500. Smith was tough, talented and excellent at digging pucks off the boards.

Newly acquired Hooley Smith was matched with Nels Stewart and Babe Siebert to form the NHL's hockey's first power forward unit, the "S Line." All three were well-paid and received under-the-table bonuses which they earned with rough play and goal scoring.

In their first meeting with the cross-town rival Montreal Canadiens, Stewart garnered a major and four minor penalties while Seibert had two minors as the teams fought to a 1-1 draw.

Goalie Flat Walsh played his only game of the season on November 29, 1927 in relief of Clint Benedict in the 4-0 loss to the Boston Bruins.

Fred Brown played his first NHL game during the 1-0 loss to the Detroit Cougars on February 16, 1928. He played the rest of the regular season (15 games total, scoring once) and 9 playoff games, the sum total of his NHL career.

Stewart and Siebert were top five in the league in penalty minutes while Stewart finished top five in goals and points.

*According to NHL game sheets, Fred Brown played 15 regular season games and Frank Carson did not play in the post season. 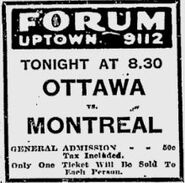