Note: The University of Toronto left the ice at the end of the second game (in Ottawa) and refused to play overtime as they were supposed to. The Canadian Amateur Hockey Association ruled that both teams would advance. Ottawa would play Toronto in a semi final replay with the winner going on to play the University in the final.

The University of Toronto defaulted to Toronto Varsity Grads. 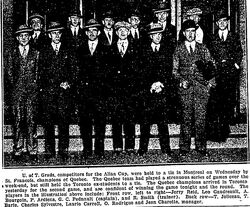 Semi Final Replay @ Ottawa
Add a photo to this gallery

Retrieved from "https://icehockey.fandom.com/wiki/1926-27_Eastern_Canada_Allan_Cup_Playoffs?oldid=700253"
Community content is available under CC-BY-SA unless otherwise noted.