The 1926–27 Ottawa Senators season was the club's 10th season of play in the NHL, 42nd overall. The Senators finished 1st in the Canadian Division and defeated the Boston Bruins in the 1927 Stanley Cup Finals 2 games to 1 (with 2 ties) to win the Stanley Cup for the fourth time in seven years, and 11th overall, including the pre-NHL years.

The league expanded by 3 teams, as the Chicago Black Hawks, Detroit Cougars and New York Rangers would all join the league to make it a 10 team league. The NHL also divided the 10 teams into 2 divisions, and the Senators found themselves in the Canadian Division. This was also the first season that the Stanley Cup was awarded to the champion of the NHL.

Prior to the start of the season, the Senators relieved head coach Alex Currie from his duties as General Manager Dave Gill would step behind the bench and become the head coach. The Senators would then go on to win 30 games and earn 64 points, both the highest in the NHL and capture the Prince of Wales Trophy, win the Canadian Division title, and earn a bye in the opening round of the playoffs. Also, Buck Boucher would take over the team captaincy from Cy Denneny.

Denneny would go on to lead the club once again offensively, scoring 17 goals and 23 points, while Hooley Smith would have a team record 125 penalty minutes. Alec Connell would lead the NHL in wins (30) and be among the league leaders in GAA (1.49) and shutouts (13).

The Montreal Canadiens defeated their cross town rivals, the Montreal Maroons and faced the Senators in a 2 game total goal series. Ottawa won it by a score of 5–1, and matched up against the Boston Bruins in the 1927 Stanley Cup Finals.

For more details on this topic, see 1927 Stanley Cup Finals.

Led by Cy Denneny and Alec Connell, the Senators won a tough 4 game series over the Bruins, winning the Stanley Cup for the fourth time in 7 years.

Eddie Gerard's name was misspelled when the ring was engraved as F. GERAD (MGR) instead of E. GERARD (MGR) on the 2nd version of the ring created in 1969. The mistake was repeated on the Replica Cup created in 1992–93. 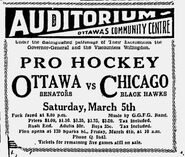 Retrieved from "https://icehockey.fandom.com/wiki/1926–27_Ottawa_Senators_season?oldid=715327"
Community content is available under CC-BY-SA unless otherwise noted.