The 1926–27 Montreal Maroons season was the Maroons' 3rd year of operation. After winning the Stanley Cup in 1925–26, the club was not able to defend the championship, losing in the first round of the playoffs to the Montreal Canadiens.

The Maroons faced off in a two-game total goals series, a 'Battle of Montreal', against the Montreal Canadiens. The first game finished in a 1–1 tie. The second game went to overtime in a scoreless tie, before the Canadiens scored to win the series, 2–1 on goals. 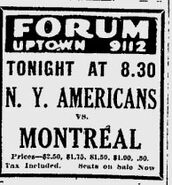 Quarter Final
Add a photo to this gallery

Retrieved from "https://icehockey.fandom.com/wiki/1926%E2%80%9327_Montreal_Maroons_season?oldid=697187"
Community content is available under CC-BY-SA unless otherwise noted.