The 1926–27 Montreal Canadiens season was the team's 18th season, and tenth in the National Hockey League (NHL). The Canadiens finished 2nd in the Canadian Division and lost in the Semi-finals to the Ottawa Senators 5 goals to 1.

The Canadiens, last place finishers in 1925–26, signed three players from the Western Hockey League. The team solved its goal-tending woes by signing George Hainsworth from Saskatoon, whom Georges Vezina had designated to be his successor. They further strengthened their team by signing Herb Gardiner from Calgary for defence and adding Art Gagne from Edmonton to the forwards.

The Canadiens moved into the Montreal Forum permanently this season. The club's first game was on November 18, 1926 against Ottawa, lost 2–1.[1] The Canadiens won eleven games in a row from February 24 until March 24. The surge enabled the Canadiens to finish second in the Canadian Division to Ottawa. 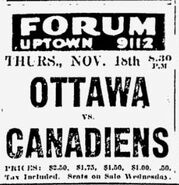