In the previous season the Eastern Canada Hockey League was reorganized as the Senior Group of the Quebec Amateur Hockey Association. This was the first full season of the group.

The Ottawa Canadiens were given permission by the Ottawa District Hockey Association to play in this league.

This group was suspended by the QAHA in January over ineligible players and unpaid dues. It was re-admitted in February.

Note: After the group was re-admitted in February, Ottawa withdrew due to finances. Nationale and Columbus Club then withdrew because of their records.

Series stopped because of deadline.

Quebec Sons of Ireland advanced to the 1925-26 Quebec Senior Playoffs. 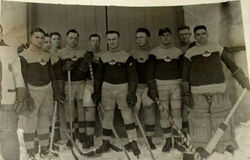 Quebec Sons of Ireland
Add a photo to this gallery 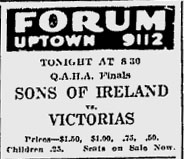 @ Ottawa
Add a photo to this gallery

Retrieved from "https://icehockey.fandom.com/wiki/1925-26_Senior_Group?oldid=614256"
Community content is available under CC-BY-SA unless otherwise noted.