This is the 1925-26 season of the Saskatchewan Junior Hockey League:

There were eight junior teams registered with the Saskatchewan Amateur Hockey Association (SAHA) - four each in the north and south. The four northern teams played playoffs arranged by the SAHA. Three of the southern teams played in a league with the winner meeting the fourth team.

The Regina Pats and Regina Falcons tied for first. Qu'Appelle finished third and last. The Pats had to replay some wins because they had overage players. 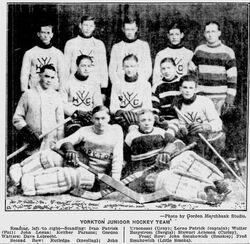 Yorkton
Add a photo to this gallery 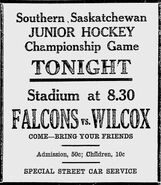 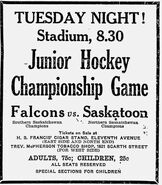 Final @ Regina
Add a photo to this gallery
Retrieved from "https://icehockey.fandom.com/wiki/1925-26_SJHL_Season?oldid=449787"
Community content is available under CC-BY-SA unless otherwise noted.