Outside sources say that it was the team from Queen's representing the East. Sources:

But one source says the team was called the "Combines", as a combination of Queen's Golden Gaels, RMC Paladins, and Kingston Frontenacs: 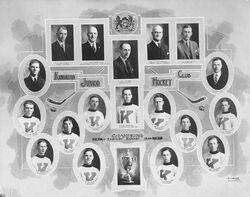 Kingston Giants
Add a photo to this gallery

Retrieved from "https://icehockey.fandom.com/wiki/1925-26_Memorial_Cup_Final?oldid=614526"
Community content is available under CC-BY-SA unless otherwise noted.