The 1925–26 Ottawa Senators season was the club's 41st season of play and 9th season in the NHL. The Senators finished 1st in the league and lost in the NHL Championship to the Montreal Maroons 2 goals to 1.

Prior to the season, Tommy Gorman and Ted Dey sold their interests in the team to T. Franklin Ahearn, who then hired Dave Gill to be the GM, and former Senators player Alex Currie as head coach.

The NHL would see the Hamilton Tigers franchise fold, and their players would be purchased by the New York Americans expansion team, while the Pittsburgh Pirates would also join the NHL, making it a 7 team league.

Ottawa, who missed the playoffs the previous season, would go on to finish with a league best 24–8–4 record, and earn a bye in the first round of the playoffs, however, they were upset by the Montreal Maroons in the Prince of Wales Trophy finals, losing the 2 game total goal series 2–1. Cy Denneny would once again lead the club offensively, scoring 24 goals and 36 points, while Frank Nighbor would win the Lady Byng Trophy for the 2nd straight season. 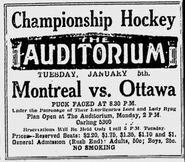