The 1925–26 Montreal Maroons season was the 2nd season of the Maroons franchise in the National Hockey League (NHL). The club finished 2nd in the league and defeated the Victoria Cougars in the 1926 Stanley Cup Finals 3 games to 1.

GM James Strachan signed Babe Siebert after watching him play for a Niagara Falls amateur team. His next target was a powerful centreman playing in Cleveland, Nels Stewart. Large for his day at 6'1" and 200lbs, Strachan outbid the Toronto St. Patricks for Stewart. Siebert and Stewart would power the Maroons offense for the next seven seasons.

Rookie Nels Stewart led the league with 34 goals and 42 points. His accomplishments also won him the Hart Memorial Trophy as the league's most valuable player. Stewart is the only NHL player to win the Hart Trophy as a rookie.

Main article: 1926 Stanley Cup Finals
Nels Stewart was "Old Poison" to the Victoria Cougars, as he scored 6 goals in the 4 games and goaltender Clint Benedict shut out the westerners three times. All games were played at the Forum in Montreal.

Eddie Gerard's name was misspelled when the ring was engraved as F. GERAD (MGR) instead of E. GERARD (MGR) on the 2nd version of the ring created in 1969. The mistake was repeated on the Replica Cup created in 1992–93. 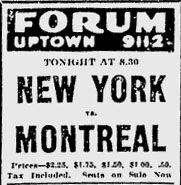 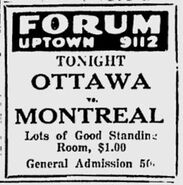 Stanley Cup Final
Add a photo to this gallery

Retrieved from "https://icehockey.fandom.com/wiki/1925–26_Montreal_Maroons_season?oldid=726895"
Community content is available under CC-BY-SA unless otherwise noted.