The 1925–26 Montreal Canadiens season was the team's 17th season and ninth as a member of the National Hockey League (NHL). The Canadiens lost their star goalie Georges Vezina to tuberculosis and struggled as a team, not making the playoffs. The league added teams in Pittsburgh and New York, New York taking the players of the former Hamilton Tigers franchise.

The team had a large turnover of personnel, partly due to Vezina's deaparture. Alphonse Lacroix, Herb Rheaume and Bill Taugher all appeared in the Canadien's net. New players included Bill Holmes, Wildor Larochelle, Albert Leduc, Alfred Lepine, Hector Lepine, Joe Matte and Roland Paulhus. Departures included the Cleghorn brothers, Odie and Sprague. Odie signed with Pittsburgh as playing-coach and Sprague was traded to the Boston Bruins for $5,000 on November 8, 1925. Cecil Hart took over as coach from Leo Dandurand, and Billy Coutu was named team captain.

Since 1911, Georges Vezina had been the Montreal Canadiens goaltender, and had led them to the Cup in 1924. In the first game of this season, he collapsed on the ice as the second period got underway. It was found that he had contracted tuberculosis and could no longer play. He went home to Chicoutimi, Quebec, where he died in March 1926. The team struggled with several goaltenders before Herb Rheaume won the job, but the team finished last.

In the second half of the season, the team had a twelve-game losing streak, from February 13, losing 3-0 to Pittsburgh, until March 16, winning 6–1 over Toronto.

The Canadiens did not qualify for the playoffs. 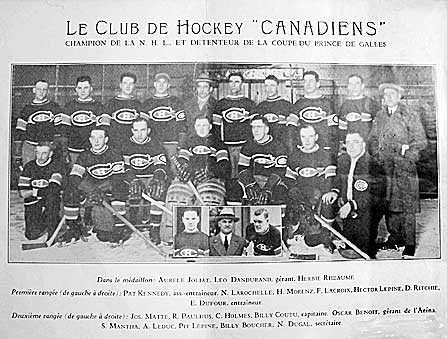 Faceoff between Burch and Morenz on MSG opening night, December 15, 1925.

Shorty Green scores the irst goal at MSG on Herb Rhéaume.
Add a photo to this gallery

Video of a Montreal Canadiens practice from early November 1925 which segues into the Habs playing the New York Americans in the first game at Madison Square Garden on December 15, 1925.

Retrieved from "https://icehockey.fandom.com/wiki/1925%E2%80%9326_Montreal_Canadiens_season?oldid=688907"
Community content is available under CC-BY-SA unless otherwise noted.