A rookie forward named Howie Morenz scored a hat-trick in game one and a further goal in game two to lead the Canadiens.

&-Name was left off the Stanley Cup. 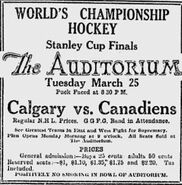