This is the 1924-25 season of the Saskatchewan Junior Hockey League:

There were nine junior teams registered with the Saskatchewan Amateur Hockey Association - four in the north and five in the south. They played a series of playoffs arranged by the SAHA.

Qu'Appelle & Broadview were both disqualified for rules violations. 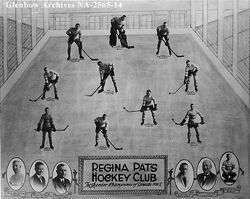 Retrieved from "https://icehockey.fandom.com/wiki/1924-25_SJHL_Season?oldid=458102"
Community content is available under CC-BY-SA unless otherwise noted.