This is the 1924-25 season of the Ontario Hockey Association's Junior series:

Note: After the end of group play and the start of Hamilton Rowing Club's next round, it was discovered that Niagara Falls had used an ineligible player. Since Niagara Falls had defeated Grimsby 2-0 and therefore hurt its chances to advance, Grimsby was also allowed to advance.

Port Dover withdrew and its record was erased.

Cayuga defaulted so that its players could join the intermediate team. 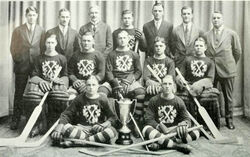 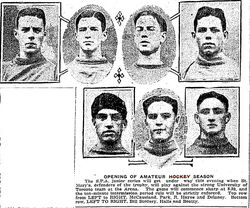 Owen Sound
Add a photo to this gallery 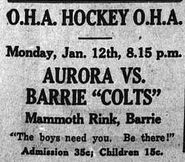 Retrieved from "https://icehockey.fandom.com/wiki/1924-25_OHA_Junior_Season?oldid=458127"
Community content is available under CC-BY-SA unless otherwise noted.