Ice Hockey Wiki
Register
Don't have an account?
Sign In
Advertisement
in: National Hockey League seasons, 1924 in hockey, 1925 in hockey

The 1924-25 NHL season was the eighth season of the National Hockey League. Six teams each played 30 games. The Stanley Cup winners were the Victoria Cougars of the WCHL, the last non-NHL team to win the Cup, who defeated the Montreal Canadiens. The NHL regular season champion Hamilton Tigers did not participate in the playoffs, as their players demanded to their owner, Percy Thompson that they would not participate in the NHL Finals unless they received an additional $200 each for the extra six games played that year. Under their contracts the Tigers players were to receive the same amount of money no matter how many games they played from December 1 1924 - March 31 1925 (even though the season started on November 29 1924). NHL President Frank Calder was not amused, stating that the players would be fined or suspended if they did not play in the final series, but the players stated that they would rather retire than advantage to be taken of them. The day of the final game of the Semi-Final, Tiger Shorty Green met with Calder to try and reach an agreement, but to no avail. The players were all suspended and fined $200 each, therefore eliminating themselves from the playoffs.

Prior to the start of this hockey season, the Pacific Coast Hockey Association folded and two of its teams, the Vancouver Maroons and Victoria Cougars, joined the Western Canada Hockey League. This meant that after three seasons of having three leagues compete for the Stanley Cup, there were once again only two.

A new trophy was added for the 1924-25 NHL season. The original Lady Byng Trophy was donated by Lady Bying, wife of Viscount Byng of Vimy, to be handed out to the player who shows the best sportsmanship and gentlemanly conduct combined with performance in play. She presented it to Frank Nighbor of the Ottawa Senators.

This was the first campaign for the Montreal Maroons and Boston Bruins, the first American NHL team. It was also the last season for the Hamilton Tigers, whose franchise would be revoked at season's end. The number of games per season was also increased from 24 to 30.

A new arena, the Montreal Forum, was built, and it was to house the Maroons. But it was the Canadiens who would play in it first. Amongst the wails of Forum management, because the Mount Royal Arena couldn't produce ice, it was decided to move a game against the Toronto St. Patricks to the Forum. The Canadiens beat the St. Patricks 7-1, as Billy Boucher scored a hat trick.

On December 17th, goaltenders Jake Forbes of Hamilton and Alex Connell of Ottawa engaged in the first ever scoreless tie in a regular season game in NHL history.

Thought of as over the hill, Ottawa had let right wing Punch Broadbent go to the Montreal Maroon hockey club. Broadbent scored five goals on January 7, 1925 as the Maroons dominated at Abso-Pure rink in Hamilton and beat the Tigers 6-2.

With an increase in the number of NHL teams, the NHL changed its playoff format by having the second and third place teams play a two game total goals series to see who would play the number one seed for the NHL championship, the Prince of Wales Trophy. The winner of the Wales Trophy would go on to play the winner of the Western Canada Hockey League for the Stanley Cup.

The third seed Montreal Canadiens played against the second seed Toronto St. Patricks in a total goals series. The winner of that series was to go on and play the first seed team, the Hamilton Tigers. But it was not to happen that way. During the total goals series, the Hamilton players demanded $200 each for the extra six games played during the regular season and the league threatened to suspend the players and the team. Last ditch efforts to reach a compromise failed and the Tigers were suspended. It was suggested that the Ottawa Senators be included in the playoffs, but Charlie Querrie and Leo Dandurand cited a fourth place finish didn't qualify Ottawa a playoff berth and it was decided that Montreal and Toronto would play for the league title.NHL president Frank Calder announced that the Canadiens would play home games at the Forum, but Leo Dandurand said that they would be played at Mount Royal Arena unless it were necessary to move to the Forum, citing home games were home games, and the Canadiens would play better in front of their own fans. Calder backed down from his stand. Montreal won the series against Toronto and was awarded the Prince of Wales Trophy and earned the right to play for the Stanley Cup.

Main article: 1925 Stanley Cup Finals
Over in the Western Canada Hockey League, the third place Victoria Cougars won their league championship and would face the Montreal Canadiens for the Stanley Cup championship. Victoria easily beat Montreal three games to one out-scoring the Canadiens 16 to 8. This marks the first, and last, time since the inception of the NHL that a non-NHL team won the Stanley Cup. On a foot-note, though, the Seattle Metropolitans could have claimed the Cup during the flu cancelled season of 1919, but chose not to out of good-sportsmanship. The series was played in Patrick Arena in Victoria .

The following is a list of players of note who played their first NHL game in 1924-25 (listed with their first team, asterisk(*) marks debut in playoffs):

The following is a list of players of note that played their last game in the NHL in 1924-25 (listed with their last team): 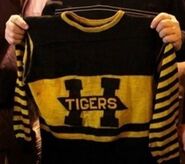