These are the 1924-25 Alberta Senior Playoffs. They decided the provincial champion and the entry into the Allan Cup playoffs.

The Dreadnoughts defaulted their last two games (one to each opponent) because of personnel problems.

The second half was cut short by the Alberta Amateur Hockey Association (AAHA) because of a national deadline. The AAHA ordered a Coleman-Bellevue semi-final with the winner going against Blairmore in the final.

After this game, it was decided by the AAHA that the Bellevue goaltender Wilf Talbot, was ineligible because he had played for the Cleveland team in the United States Amateur Hockey Association (USAHA). Despite the name, the USAHA was considered a professional league since it paid Canadian players. Bellevue withdrew since it could not get a replacement for Talbot. 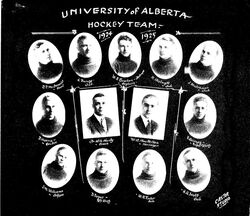 University of Alberta
Add a photo to this gallery

Retrieved from "https://icehockey.fandom.com/wiki/1924-25_Alberta_Senior_Playoffs?oldid=729744"
Community content is available under CC-BY-SA unless otherwise noted.