The 1924–25 Ottawa Senators season was the club's 40th season of play and 8th season in the National Hockey League (NHL). Ottawa finished 4th in the league and failed to qualify for the playoffs for the first time since the 1917–18 NHL season, ending a streak of 6 straight seasons.

The NHL would expand to 6 teams, as the Montreal Maroons and the first US-based team, the Boston Bruins, joined the league. The NHL also added more games to the schedule, going from 24 to 30.

The team's ownership changed once again, a year after Ted Dey gave up the business. Frank Ahearn and Tommy Gorman reached an impasse in the management of the team. Both attempted to buy out the other. In December, Ahearn accepted Gorman's $50,000 offer for the club. In January, Gorman's offer was off, after control over all shares was not arranged. However, this may have been used as an escape clause out of the agreement, as Gorman was later to accept a position with the New York Americans. Instead, Ahearn bought out Gorman for $35,000 and Ahearn's share of the Connaught Park horse race track in Aylmer, Quebec.[1]

Cy Denneny had another spectacular season, leading the NHL in assists, finishing 2nd to Babe Dye of the Toronto St. Pats in points, and finishing 3rd to Dye and Aurel Joliat of the Montreal Canadiens in goals.

During the season, the Senators and Hamilton Tigers would play in the first ever scoreless game in NHL regular season history on December 17.

After the season, Frank Nighbor was voted the first winner of the Lady Byng Trophy, awarded to the player with the best sportsmanship and gentlemanly conduct combined with performance in play.

Before the season, the Senators and Maroons made a trade, as the Senators sent Clint Benedict and Punch Broadbent to Montreal for cash. The Sens would then sign Alec Connell to play goal for them. 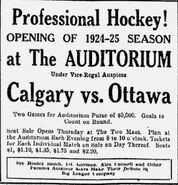 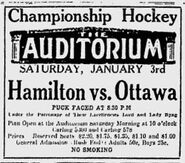