The 1924–25 Boston Bruins season was the team's 1st in the NHL. Along with the Montreal Maroons, the Bruins were the first expansion franchise in the NHL and the league’s first American-based club. The Bruins finished last in the league and did not qualify for the playoffs.

The NHL confirmed the entries of two expansion franchises, the Montreal Maroons and the Boston Bruins on October 12, 1924. The Bruins had their first practice on November 15, 1924, and played their first game on Thanksgiving, November 27, 1924. It was an exhibition game against the Saskatoon Sheiks of the Western Canada Hockey League in which Boston lost 2-1.

The Bruins first jersey was predominately brown with yellow stripes and white numbers on the back. A small bear with "Boston Bruins" wrapped around it formed the logo. The brown and yellow were taken from Bruins owner Charles Adam's grocery store chain, First National Stores. This would be the only season the Bruins wore these jerseys.

Despite problems with the ice plant that threatened the home opener [1] the Bruins started the season out auspiciously, defeating their fellow expansion Maroons squad in a nearly sold out Boston Arena 2-1. The first goal in franchise history was scored by Smokey Harris, while Carson Cooper, who assisted on Harris' goal, scored the game winner. [2]

However, Boston lost its next eleven games. After beating the Montreal Canadiens on January 10, 1925 with the first overtime goal in Bruins history scored by #5 Bernie Morris, they then went on another seven game losing streak, finishing the season in last place. The Bruins had signed veteran West Coast star goaltender Hec Fowler as their netminder, but behind a weak defense, Fowler and backup Howie Lockhart played very poorly and the Bruins were repeatedly shelled, allowing ten goals in a game twice, one of which saw Toronto player Babe Dye score five goals on December 22. [3]

The signing of senior league star netminder Doc Stewart (a practising dentist) and the purchase of Lionel Hitchman helped somewhat, but the team was riddled with injuries, and only Jimmy Herberts and Carson Cooper (who spent much of the season hurt) showed any offensive flair. The team's winning percentage of .200 was the second worst in league history to that date, and remains the tenth worst in NHL history. [4] 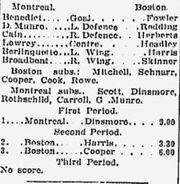 Summary of the first game.