This is the 1923-24 season of the Montreal City Hockey League:

Note: The season ended because of time constraints. It was assumed that both St Annes and McGill would win their last games. In any case McGill could not enter the provincial playoffs because they had designated their team in the Canadian Intercollegiate Athletic Union as the one eligible for the Allan Cup. The rules said that only one team could be eligible.

Note:All games were played as doubleheaders @ the Victoria Rink in Montreal 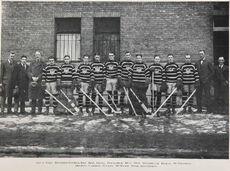 Retrieved from "https://icehockey.fandom.com/wiki/1923-24_MCHL?oldid=608649"
Community content is available under CC-BY-SA unless otherwise noted.