The 1923–24 Ottawa Senators season was the club's 39th season of play and seventh season in the NHL. Coming off a Stanley Cup Championship in 1923, they had won three cups in the previous four seasons. The Senators moved into the brand new Ottawa Auditorium prior to the season. The club had an outstanding regular season, but lost in the NHL playoffs to the Montreal Canadiens.

The five-year partnership of the Ottawa Arena Club expired in 1923. The team's ownership was unified with the parent Ottawa Hockey Association which was to be owned by Frank Ahearn and Tommy Gorman. Ted Dey gave up his half-interest in the Senators first for an investment in the Association and the Auditorium, then sold his share to Ahearn and Gorman.[1]

Cy Denneny led the NHL in scoring with 22 goals and 23 points, while Frank Nighbor became the first player to win the Hart Trophy, awarded to the MVP of the league. The Sens defense were led by Buck Boucher and King Clancy, who both finished among the league leaders in points.

Clint Benedict had another very solid season, as his 15 wins and 3 shutouts led the NHL, and he had a personal best GAA of 1.99.

In a game in late February, the Senators were late for a game against the Montreal Canadiens in Montreal due to their train being snowbound in Hawkesbury, Ontario for the night. While out to try and get some food for his teammates Cy Denneny fell down a well, but sustained no injuries from the fall.

The Senators again qualified for the playoffs and faced the Canadiens for the brand new Prince of Wales Trophy. Ottawa was defending champion and had the top record for the regular season. In an upset Montreal defeated Ottawa 5–2 in a two-game total goal series. Benedict's play came under criticism, with the Senators management publicly stating he was under the weather, and privately were withholding pay from Benedict on account of drinking affecting his play. The dispute ended up in court and Benedict would be traded to the Montreal Maroons before the next season.[2]

On March 25, the Canadiens and Calgary Tigers Stanley Cup Final game was played at the Ottawa Auditorium, due to the Mount Royal Arena in Montreal not having artificial ice. Montreal won the game and the 1924 Stanley Cup. 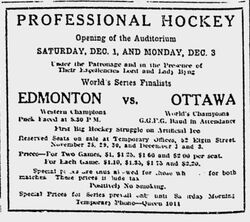 Pre-season and the opening of the Auditorium. 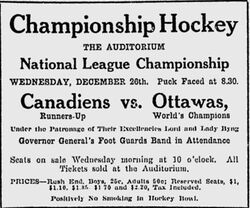 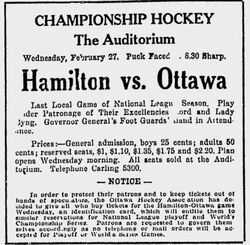 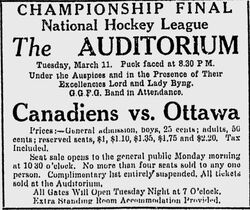