The 1922 Stanley Cup Final was contested by the National Hockey League (NHL) champion Toronto St. Pats and the Pacific Coast Hockey Association (PCHA) champion Vancouver Millionaires. The St. Pats defeated Vancouver three games to two in the best-of-five game series to win their only Stanley Cup as the St. Pats.[1] All games were held at Arena Gardens in Toronto.

Vancouver finished second overall in the 1921–22 PCHA regular season standings with a 12–12 record. However, they then went on to defeat the 12–11–1 first place Seattle Metropolitans in the PCHA championship series, winning both games by 1–0.

After defeating the WCHL's Regina Capitals in the preliminary series, the PCHA's Vancouver Millionaires travelled to Toronto for the Final.

A fifth and deciding game five was necessary in this series to determine who would win the Cup. After Vancouver won game one, 4–3, Babe Dye scored 4:50 into overtime of game two to give Toronto a 2–1 win. Then in game three, goaltender Hugh Lehman led the Millionaires to a 3–0 shutout win. However, the St. Patricks tied the series in game four, 6–0, as John Ross Roach became the first rookie goaltender to record a Stanley Cup shutout. game five belonged to Toronto as Dye scored 4 goals in a 5–1 victory to clinch the Cup.

For the series, Dye scored 9 out of the St. Pats 16 goals, while Roach posted a 1.80 goals-against average. 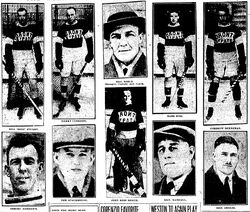