The 1922–23 Ottawa Senators season was the club's 38th season of play and sixth season in the NHL. They were coming off a disappointing playoff run in 1922, as they lost to the Toronto St. Pats in the NHL finals in a close, hard fought series. The Senators would finish first in the standings, defeat Montreal in the playoffs, defeat Vancouver in the Stanley Cup semi-finals and defeat Edmonton to win their 10th Stanley Cup title.

Cy Denneny would once again have a strong season, scoring a team high 21 goals, and finishing 2nd in the NHL with 31 points. On February 7, Denneny would score his 143rd career goal, surpassing Joe Malone as the all-time goal scoring leader in a 3–0 Senators win over the Montreal Canadiens.

Defenceman Buck Boucher would get a career high 24 points (15 goals-9 assists), and would lead the club with 44 PIM.

Clint Benedict would once again have a very solid season, leading the league with 14 wins, 4 shutouts and a 2.18 GAA.

In the NHL finals, the Senators would face the Montreal Canadiens in a two-game total-goals series to determine the O'Brien Cup winner, and the Sens would prevail by a close 3–2 score in the series, and go on to face the Vancouver Maroons, the host team from the PCHA.

The Maroons lost to the Edmonton Eskimos in the WCHL Finals, so they would have to face Ottawa, with the winner of this series playing Edmonton for the Stanley Cup. The series was played at Denman Arena in Vancouver, and the Senators would shut out the Maroons in the opening game. Vancouver stormed back with a big 4–1 win game 2, however, Ottawa, despite numerous injuries, would use their grit, and win the series in 4 games, and earn a berth in the finals against Edmonton.

The 1923 Stanley Cup Finals would be a best of three series between Ottawa and Edmonton, and the Sens started off on the right foot with a 2–1 victory in game one. In game two, the Senators would be led by Clint Benedict, who would shut out the Eskimos in a 1–0 victory, giving Ottawa their third Stanley Cup in four years.

The Senators returned home on Friday, April 6, 1923 from Vancouver. Greeted by Ottawa Mayor Plant, and accompanied by the Governor-Generals Foot Guards and the Ottawa Silver Band, the team paraded through Ottawa's downtown streets.[1] A banquet was held for the team on Monday, April 19, where each of the ten team members received a gold watch. According to Mayor Plant, "this is a citizens' banquet, not a civic one, as the citizens believe you have given Ottawa the best advertising it has ever had."[2]

The Senators never did engrave their name on the Cup for their 1923 championship. It was not until the trophy was redesigned in 1948 that the words "1923 Ottawa Senators" was put onto its then-new collar. 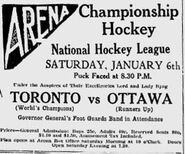 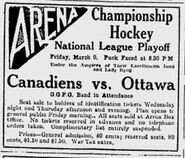 Retrieved from "https://icehockey.fandom.com/wiki/1922–23_Ottawa_Senators_season?oldid=698582"
Community content is available under CC-BY-SA unless otherwise noted.