This is the 1921-22 season of the Saskatchewan Junior Hockey League:

There were six junior teams registered with the Saskatchewan Amateur Hockey Association (SAHA) this season. Four of them played in an "Inter-City League" (Regina and Moose Jaw). The other two participated in the provincial playoffs arranged by the SAHA along with the league winner.

The balance of the league's games were cancelled because they would have had no bearing on the final standings. 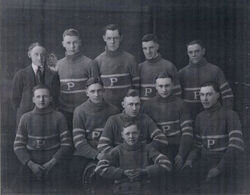 Retrieved from "https://icehockey.fandom.com/wiki/1921-22_SJHL_Season?oldid=454086"
Community content is available under CC-BY-SA unless otherwise noted.