Note: In the early 1920's the Thunder Bay champions played in the Eastern Canada playoffs in the years that the Memorial Cup final was held in the west, 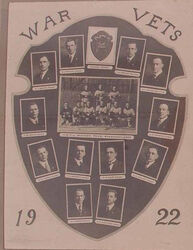 Toronto Aura Lee
Add a photo to this gallery

Semi Final @ Toronto
Add a photo to this gallery

Retrieved from "https://icehockey.fandom.com/wiki/1921-22_Eastern_Canada_Memorial_Cup_Playoffs?oldid=614401"
Community content is available under CC-BY-SA unless otherwise noted.