The 1921–22 Ottawa Senators season was the club's 37th season of play, fifth season in the NHL, and they were coming off back-to-back Stanley Cup Championship seasons, winning in 1920 and 1921. The Senators would finish in first place in the standings, but lost in the playoff to the Toronto St. Pats.

Punch Broadbent would emerge as the offensive leader for the Senators, leading the NHL in goals (32) and points (46). He would score in an NHL record 16 straight games. Teammate Cy Denneny would finish in 2nd in NHL scoring with 39 points, and 3rd in goals at 27.

On February 1, former Senators player Sprague Cleghorn, now on the Montreal Canadiens, would cut Senators players Eddie Gerard and Cy Denneny, while take a charge at Frank Nighbor. All 3 players would miss 2 games due to the injuries they occurred, while Cleghorn was given a match penalty and fined $15 by the league.

Clint Benedict would once again have a great season, winning an NHL best 14 games, while leading the league with a 3.34 GAA.

On February 11, 1922, the Senators and the Toronto St. Pats would make NHL history, as the teams played to a 4–4 draw, the first time in NHL history that a game ended in a tie.

The Senators would once again play for the O'Brien Cup, where they would face the St. Pats in a 2 game total goal series. The Senators would find themselves behind 5–4 after the first game, then the teams would play to a 0–0 tie in the second game, which eliminated the Senators, and ended their quest for their third straight Stanley Cup. 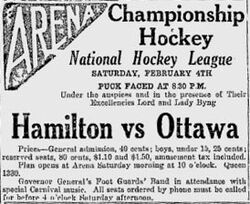 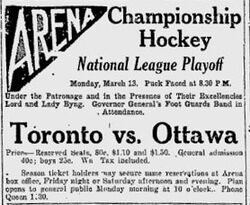 Retrieved from "https://icehockey.fandom.com/wiki/1921–22_Ottawa_Senators_season?oldid=698581"
Community content is available under CC-BY-SA unless otherwise noted.